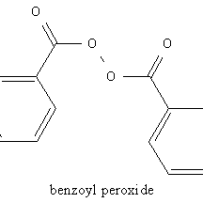 This article is not aimed at demonizing benzoyl peroxide, however, it is important to fully understand why this compound, albeit popular, is just not the right answer for the topical treatment of acne. Benzoyl Peroxide appears in almost every acne commercial and “3-step” acne kit you can buy. It has become the absolute staple of topical acne treatments. Why? Well there’s no denying it works. However, there’s also no denying it fails the cost-benefit test. Not only are there equally, and more, effective topical treatments out there for acne, but the long term effects of consistent benzoyl peroxide use alone might be enough to make you think twice about continuing to use it.

What does benzoyl peroxide do for acne?

There’s no reason to go in depth about how benzoyl peroxide functions to help destroy acne bacteria. What matters is the basic understanding of its use, and that is simply that topical application of the cream onto zits (with consistent use) kills the acne bacteria buried under your pores. This is also why it has become popular as a face wash with a lower percent strength, because application of a milder version not only to problem areas but the entire face helps prevent pimples from appearing in the first place. Thinking logically, if the benzoyl peroxide kills acne bacteria, it’d make sense that consistent use would prevent acne from forming because it’d be getting killed any time it attempted to collect in your pores. Of course, this is the ideal. Reality is a bit different.

As we’ve extensively covered in our Diet and Acne article, application of topical creams and face washes is simply quite like covering a gun shot wound with a band-aid. Sure, you feel like you’re doing something right. However, what you’re actually doing is masking the real problem (which is fixing the inside of your body so there’s no reason you get acne bacteria forming in your pores in the first place). Since this article is not about this, and I don’t want to veer off, imagine what you do with benzoyl peroxide (or any other topical treatment). You’re simply playing “hit the mole” with acne. What you really should be doing is making sure there are no moles (acne) to appear in the first place.

Ideally, use of benzoyl peroxide on pimples on scalp, face, or body should help clear you of acne bacteria and make sure they don’t form. However, this is simply not the case most of the time. If you’ve ever suffered from anything more than extremely mild outbreaks, you know consistent use of benzoyl peroxide doesn’t clear your face for good. Acne is not a condition that can be treated with a little face wash. To the extent that topical acne treatments can aid in your journey to clear your skin, benzoyl peroxide is not the  compound you should opt for.

Benzoyl Peroxide concentrations of 2.5% were shown to be just as effective as 5-10%. Nonetheless, almost every cream you see contains at least 5%. The “maximum” creams that claim they’ll do an even better job have 10%. This is not backed up by studies. You’re basically paying extra for no reason. However, this is a minor point. What matters is benzoyl peroxide works by removing sebum from your pores (excess sebum forms pimples). Your skin is very dry after its use. Using a 5-10% strength benzoyl peroxide wash or cream consistently will, in the long run, age your skin pretty badly. This is often irrelevant to people because they want immediate results to fix their acne, but when you learn there’s things that are just as effective and don’t have this problem, benzoyl peroxide becomes irrelevant.

It bleaches your skin. This is especially problematic for pimples on scalp, as it will bleach your hair.

Without the proper use of moisturizer the drying effect actually becomes counter-intuitive because it forces your body to create more sebum instead.

Consistent use of benzoyl peroxide on red pimples will eventually kill the bacteria, but leave the red area there for months after (especially with bigger zits). This is called hyper-pigmentation. Your acne is gone in that area, but the red dot stays for a long time without consistent exfoliation.

Tea Tree Oil – we’ve covered the wonders of tea tree oil in our coverage of tea tree oil shampoo for pimples on scalp. The same point applies for any other acne on your skin, of course. Tea Tree Oil has been proven to be just as effective at killing acne bacteria on your skin, without the side effects of benzoyl peroxide. Simply dilute it with water for a 1/4 amount consistency, dap a cotton ball, and put it on your acne prone areas or skin in general. Twice a day.

Sulfur- quite possibly the best topical compound for acne treatment. Proactiv uses this in their refining mask, I have no idea why it isn’t in their regular treatment (which is mostly benzoyl peroxide, by the way). Sulfur kills acne bacteria and has been used since the ancient times, when people often took sulfur baths to treat any form of skin condition. There’s sulfur soaps out there, take a look.

Salicylic Acid – this is the other standard compound besides benzoyl peroxide. However, this one doesn’t have those side effects. However, it does not “kill” acne bacteria. It exfoliates your face to clean your pores. This exfoliation, nonetheless, can help with hyper-pigmentation and reduce redness. This should be the supplement on top of a sulfur or tea tree oil treatment.

Again, your focus in fighting pimples on scalp, face, or body should be with fixing the inside of your body with proper diet and supplementation. However, to the extent you use topical treatments, stick with the ones outlined above. Get away from benzoyl peroxide. As you can see, there’s things that are equally effective (tea tree oil) and better (sulfur) that can get the job done without the harsh sides.